The Notion of Prophecy

This text by Daniel Cadrin, OP, was prepared as part of the CRC’s Fall 2021 programming around the theme “Returning to the source: Charism and the prophetic character in an evolving consecrated life.” Additional resources from this programming are available on our website here.

On this day following elections that have left us with various feelings, we are going to talk about a dimension of our consecrated life that also arouses reactions, which is even its role: prophecy. We are talking about it because, first of all, it emerged from the spring General Assembly as one of the CRC’s three priorities: Be a prophetic voice of consecrated life. But also, during the Year of Consecrated Life in 2015, in his Apostolic Letter to All Consecrated People, Pope Francis wrote: I am counting on you “to wake up the world”, since the distinctive sign of consecrated life is prophecy. He called upon us to interpret events, to create signs of fraternity, with freedom and without being discouraged.

To help us move forward on this prophetic path, here are some things to think about: the link to the context, the various forms of prophecy, current issues and avenues to explore.

(Acts 2:18: Even on the slaves, men and women, shall I pour out my Spirit and they shall prophesy.)

When we look at and hear the prophets in the Scriptures, certain traits stand out that remain relevant.

The interventions of the prophets are closely linked to what is happening in their environment, in the social, political, economic, but also the religious and cultural world. Prophecy is not in the clouds but is set in a moving history, with its forces of death and new life. It is very embodied, attentive to what dies and to what is born, to what kills and what resuscitates, to what is injured and can be reborn. This invites us to pay attention to what is happening today in our societies, in the Church, in consecrated life and in all creation.

The prophets denounce the forces of death, the idols, and call out, in the name of the living God, for justice, for concern for the weak (at the time the widow, the orphan, and the stranger). The two are intrinsically connected: faith in the living God and justice and peace; idolatry and oppression. But prophecy, which is very much tied to the present, is not locked up in the present. It takes place over a long period of time: it is rooted in a memory, it assumes an historical heritage; and it opens up a future, based on promise. In this way, a hope is offered which revives and calls for commitment to neighbour and to God. This invites us to ask ourselves, among other things, what is our own heritage, in our religious communities, as witnesses of prophecy.

Finally, the prophets arouse reactions, they do not leave people indifferent, neither the powerful nor the ordinary people. They meet with both support and opposition. One cannot be prophetic and be content to conform to the present, hesitating to go against the grain or to innovate. But how far can one go in dissonance and dissent with the values ​​of our society?

(Luke 24:19: Jesus of Nazareth, who showed himself a prophet powerful in action and speech before God and the whole people.)

What is prophetic? One thinks spontaneously — and that is reflected in the Assembly’s reflections — of actions for justice in society. And in point of fact, they are indeed prophetic. But in doing that, there is a risk of narrowing the prophetic field to what has very much characterized consecrated life and has perhaps defined it too much: works. The project of consecrated life and its prophetic nature are broader. All the more so, as the statistics presented to the GA on consecrated life in Canada indicated, the average age there is high (that’s an understatement!). The capacities of people and institutions are not what they used to be. That does not detract from the fact that older members of consecrated life can lead an equally evangelical life; but not like before. So let’s broaden the field of forms of prophecy.

First, who can be prophetic? Individuals, of course, but also communities, networks, organizations, coalitions, which we can participate in without necessarily being their creators and leaders. And how? Through actions and words, of course, but also through gestures, projects, witnesses, lifestyles, vows (a whole field to work on), meditations, writings, social media, etc.

We should not forget that what is prophetic in one time and one place is not necessarily prophetic in another time and another place. In Quebec and other regions of the world, in previous centuries, communities of women religious established, managed and directed educational, health and social service institutions. These women, by what they were and did, offered a prophetic sign, opened up new paths. Nowadays, you don’t have to be a nun to do that. Or, on the side of my own community, the o.p., we set up university faculties (psychology, social sciences, etc.) that trained people and opened up the future. They don’t need us for that now. So, what would be prophetic in the here and now?

(Jer 22:3: Act with justice and righteousness, and deliver from the hand of the oppressor anyone who has been robbed. And do no wrong or violence to the alien, the orphan, and the widow, nor shed innocent blood in this place.)

I would like to point out some current issues that may require the prophetism of consecrated life, in various ways. You can add other issues that affect you. And since we cannot be everywhere (leave that to God!), some issues may challenge us more than others.

(1 Cor 14:3: Someone who prophesies speaks to other people, building them up and giving them encouragement and reassurance.)

In the first Christian communities, there were prophets. Men and women could prophesy. Paul indicates three roles of the prophets, which seem very significant to me: 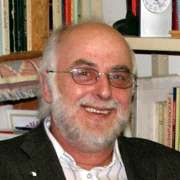