Missionary Sisters of the Immaculate Conception: Echoes of the General Chapter

After postponing our chapter at least three times, due to the Covid-19 pandemic, we finally obtained permission from Rome to hold it in telematic mode (Zoom), from November 3, 2021, to January 10, 2022. As we followed the protocol required by Rome, the election stage was longer. But it was a wonderful experience.

The theme of our chapter was:

Dynamized by our charism,
let us dare to go out to meet life with Mary of the Magnificat

DYNAMIZED BY OUR SPIRITUALITY OF THANKSGIVING,
IN INTERCULTURAL COMMUNITIES,
WE LISTEN TO THE CRY OF THE PERIPHERIES
AND
DARE TO GO OUT TO MEET LIFE
WITH MARY OF THE MAGNIFICAT.

COMMITMENT TO THE CHURCH THAT GOES OUT
RESPECT AND CARE FOR MOTHER EARTH
YOUTH AND VOCATION MINISTRY
FORMATION AT ALL LEVELS
PERSONNEL AND FINANCIAL PLANNING FOR THE MISSION.

For the first time in the history of the Institute, the five sisters forming the General Administration are of five different nationalities and countries: 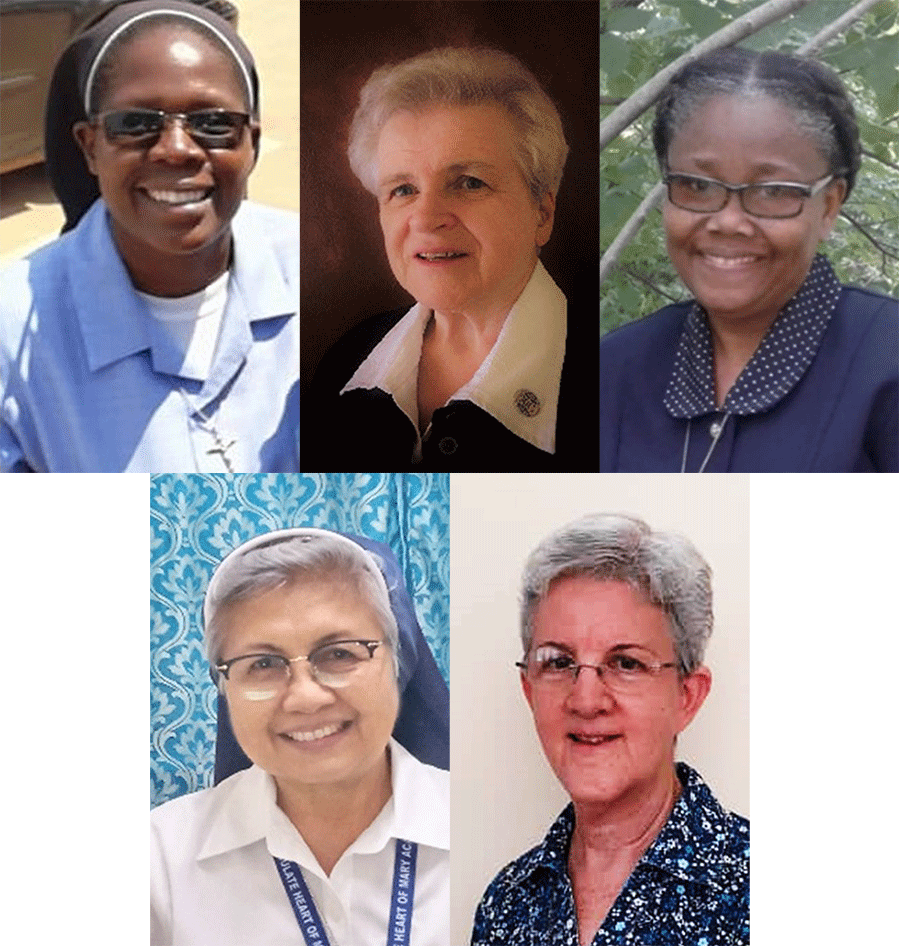 Our new Superior General, Sister Cecilia Mzumara is from Malawi. She has served in Malawi and

Zambia. She studied education and religious studies at the Catholic University of Malawi, Limbe.  She has worked mainly in education, at the primary and secondary levels as a teacher and/or director and in teacher training.  She has also spent several years in vocation ministry and initial formation of young M.I.C.  as well as accompanying our African scholastics. In the Church, she was involved in giving Christian formation sessions to adults, and even as secretary to the archdiocese.

A valued community animator, she served on the Provincial Councils before becoming the Provincial Superior of the Province of Our Lady of Africa which includes two countries: Malawi and Zambia. During her formation at the International Scholasticate of Montreal, Cecilia acquired a very good knowledge of French and is fluent in English. We are delighted with this wise choice as well as that of the four other sisters who will form a team with her.  Our Foundress, Venerable Delia Tétreault, surely looks upon them with great love: is her dream of seeing children of all races and colors singing together the praises of the Lord not being realized?

With Mary, we sing our Magnificat and thank the Holy Spirit who, in a very special way, has accompanied us in all our discernments.

The outgoing Superior General, Sister Delia Regidor, m.i.c. and the assistants whose term of office has ended would like to cordially thank the CRC for the valuable formation they received during their six years of service to the Institute, in the universal Church.