Sister Sue Wilson, from the Office for Systemic Justice (Federation of Sisters of St. Joseph), & Mrs. Darlene O’Leary, from the Martha Justice Ministry (Sisters of St. Martha, Antigonish) were present at the COP15 which ended today in Montreal.  They share their first thoughts with us.

On Monday December 12, they were part of a multifaith delegation which met with Elizabeth Mrema (center of the photo), the Executive Secretary for the UN Convention on Biological Diversity (CBD). 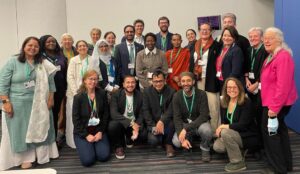 “We talked about the priorities in the Multifaith statement.  The Executive Secretary responded with gratitude encouraging all faith leaders to speak out on these issues to call governments to greater ambition at COP 15 and to catalyze new ways for humanity to be in relationship with the planet and its inhabitants.

The importance of the lens of integral ecology was clear at this conference.  Many Indigenous groups, among others, were emphasizing the interconnectedness of life by highlighting the importance of integrating human rights throughout all the articles in the framework.  Equally, the conference’s focus on addressing the ‘drivers’ of biodiversity loss, echoed Laudato Si’s insistence on targeting root causes for real transformation.

Given Canada’s poor record in meeting the commitments for action made at past biodiversity and climate change conferences, it will be important that the final draft of the CBD framework has strong language requiring countries to review their progress toward meeting global targets and to ratchet up action when targets are not being met. If, in the end, the CBD framework does not have these requirements, we will need to advocate for such legislation in Canada”.

“Attending COP15 reinforced for me the important presence of faith communities as witnesses and engaged civil society organizations at the global level. It is a crucial moment for our planet and all species, and COP15 is setting a direction for the decade to come. As part of the multifaith coalition, we were able to show how deeply our communities and constituencies are committed to protecting our common home and that we are holding decision makers to account to deliver a strong final Global Biodiversity Framework agreement.”

To read the six recommendations of the Multifaith delegation: https://www.biodiversity.faith/policy

Members organizations of Faiths at COP15 will now watch closely the implementation of this framework.