Faith and Hope in the Middle of the Night: Feedback on the 2018 General Assembly

From May 24 to 27, 2018, more than 250 religious leaders from some 240 Catholic congregations from across Canada attended the 32nd General Assembly of the Canadian Religious Conference (CRC). The theme of this edition, “The nights are laden with life. Watcher, what do you say?,” was developed by Elena Lasida, doctor in Social and Economic Sciences and professor at the Catholic Institute of Paris. Working for over 15 years in the Episcopal Commission for Justice and Peace of the Conference of Bishops of France (CEF), she has developed a reflection based on the encyclical Laudato Si’ on how sustainable development and a new economy might apply to the Canadian religious context. Her two-part intervention on May 25 and 26 was greatly appreciated by the members. 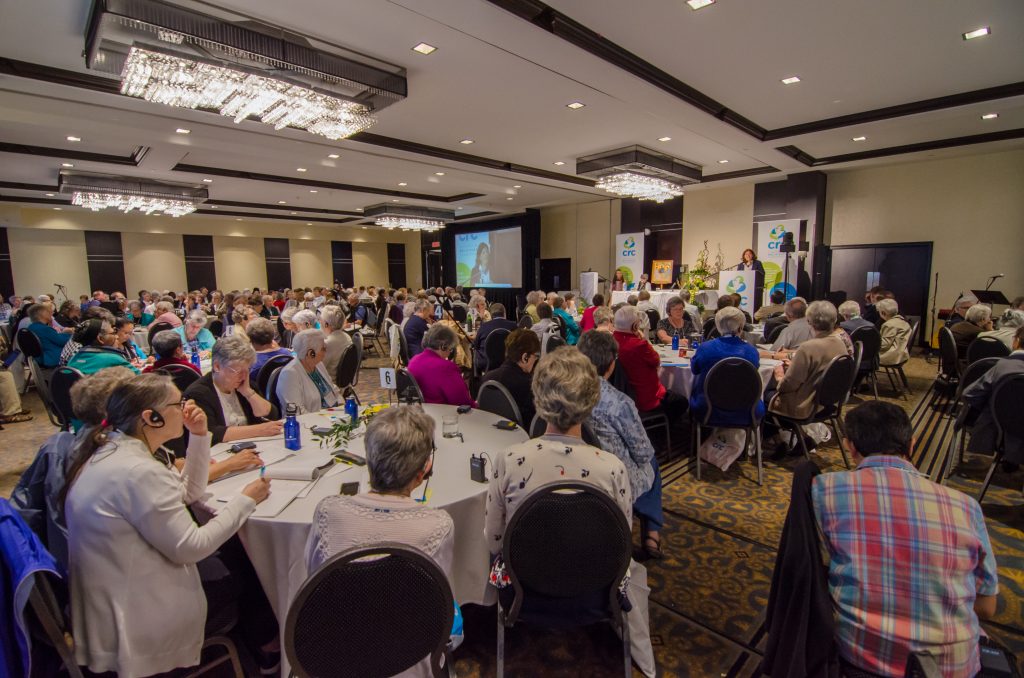 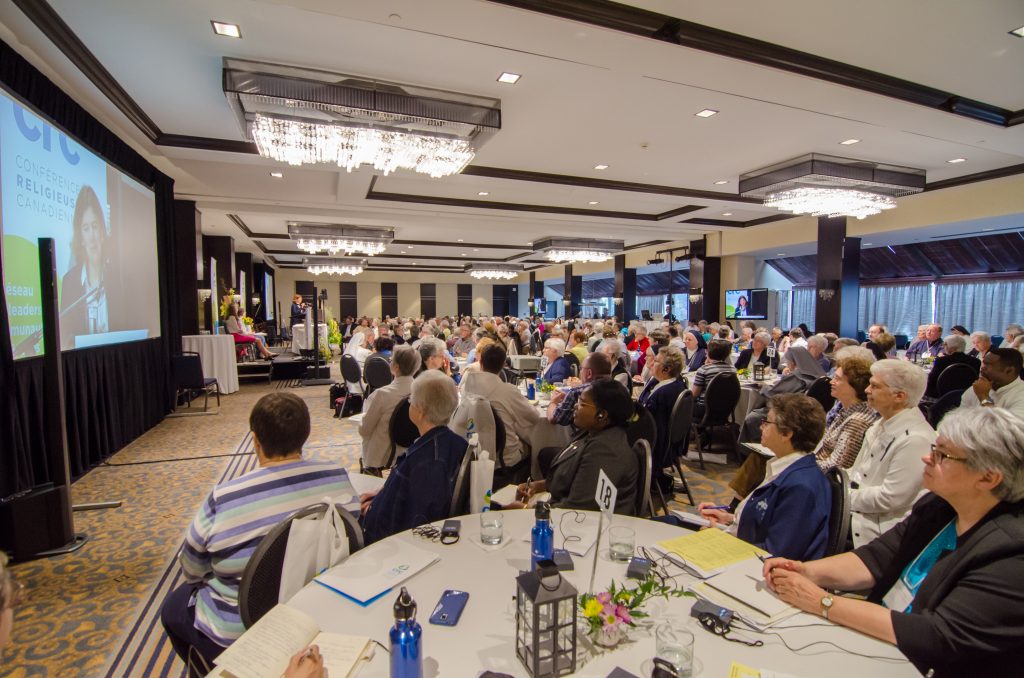 The Assembly, which is held every two years, is an opportunity for the leaders of religious congregation, members of the CRC, to meet one another and discuss together issues of their ministry and religious life in Canada. As in 2016, this gathering was held at the Sheraton Montreal Airport Hotel (555 McMillan Avenue) near the Pierre Elliott Trudeau International Airport.

Watch below the Salt and Light TV spot realized during the General Assembly of the CRC and broadcasted in Perspectives.

Click on one of the links below to read press articles about the CRC 2018 General Assembly.

Summary of the Assembly

It was before an assembly of about 250 men and women religious from across Canada that the outgoing CRC President, Sister Michelle Payette, MIC, opened the 32nd CRC General Assembly on May 24th. As is traditional, Sister Michelle invited several special guests to address the Assembly. Among them was a guest who is rarely in Canada: Father Arturo Sosa, SJ, Superior General of the Jesuits. He was in the process of touring the country on the occasion of the re-founding of the Jesuit Province of Canada. Subsequent speakers to the Assembly’s participants included Bishop Noël Simard, President of the AÉCQ (Assembly of Catholic Bishops of Quebec), Sister Carole Shinnick, SSND, and Sister Sharlet Wagner, CSC, outgoing President and President-elect of the LCWR respectively, as well as Brother José Francisco Flores Gamio, FSC, treasurer of the CIRM (Conferencia de Superiores Mayores de Religiosos de México. 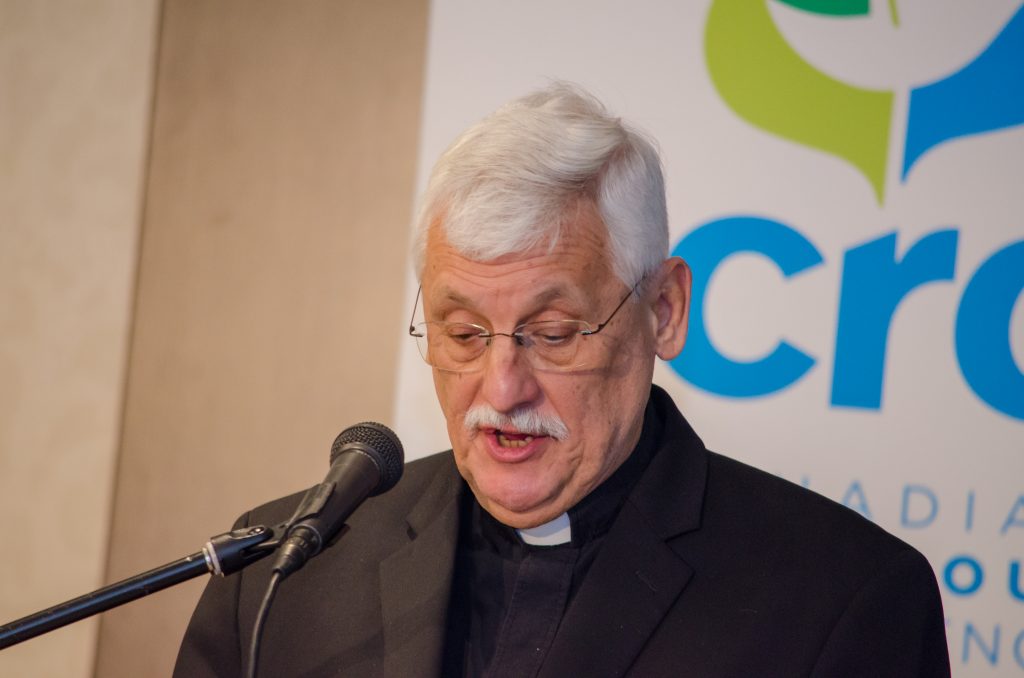 Following this opening on Thursday night, there were several highlights in the next day’s program on Friday. To prepare the participants for the Assembly’s theme, Sister Mary-Ellen Francoeur, SOS, and Sister Sophie Christine Adonisse Mbougoum, CND, facilitated a panel by sharing their personal and community experiences related to the theme.

Sister Mary-Ellen spoke about her relationship with the Spirit.

“I listened to his voice when he told me to work with First Nations. I learned a lot from the women I met.”

The breath of the Holy Spirit carried her into different missionary experiences in Africa. She rubbed shoulders with women living in situations of poverty, violence, distress and abuse. In the midst of these ordeals, Mary-Ellen was able to see that the Spirit breathed hope and life into those women, who became spokespersons of the Spirit for more justice, peace, respect and healing. 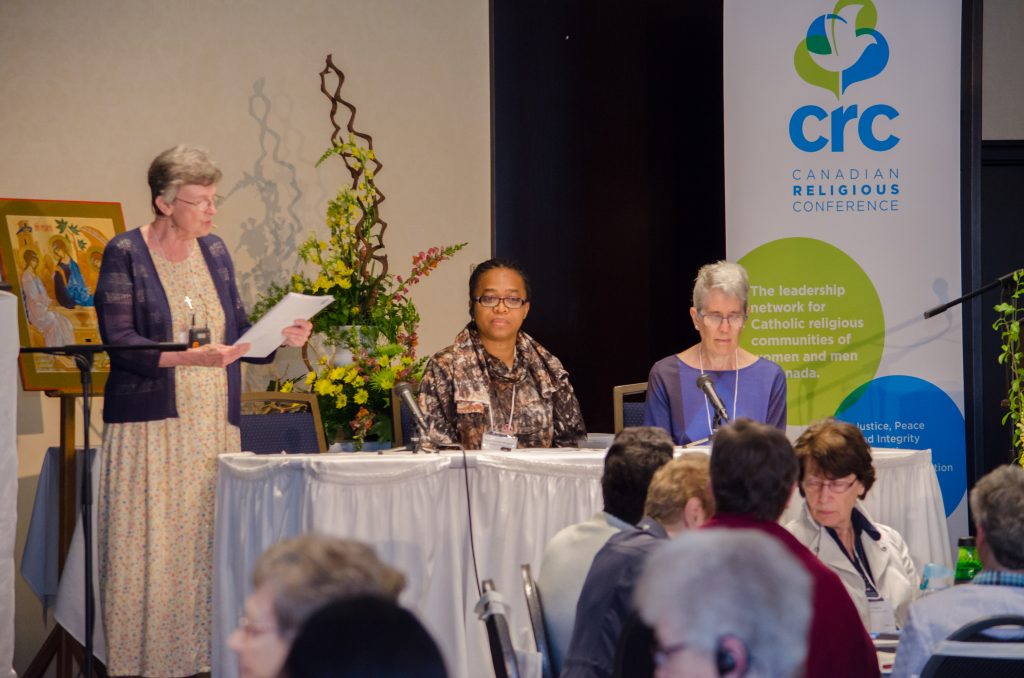 Sister Sophie shared her own experience of the abduction of her colleague Gilberte Bussière on the evening of April 4, 2014, in Cameroon. She was with her family. Anguished by this news, she listened to the Spirit to know what to do.

“When it’s nighttime, we can not do anything, but we do not sleep… So I prayed. […] For 58 days, I experienced a wonderful international friendship. I experienced the importance of prayer and, one day at a time, I needed to discern with others.”

The members then shared their own thoughts on the Assembly’s theme. Thus, in their own experiences, they emphasized the power of the Holy Spirit, the strength of prayer, communion with others, and the importance of listening to the Spirit to discern.

At the beginning of the afternoon session, Sister Michelle Payette announced that the nominees for CRC’s new Administrative Council (AC) had been automatically elected in the absence of any new nominations. Thus, the new AC is composed as follows: 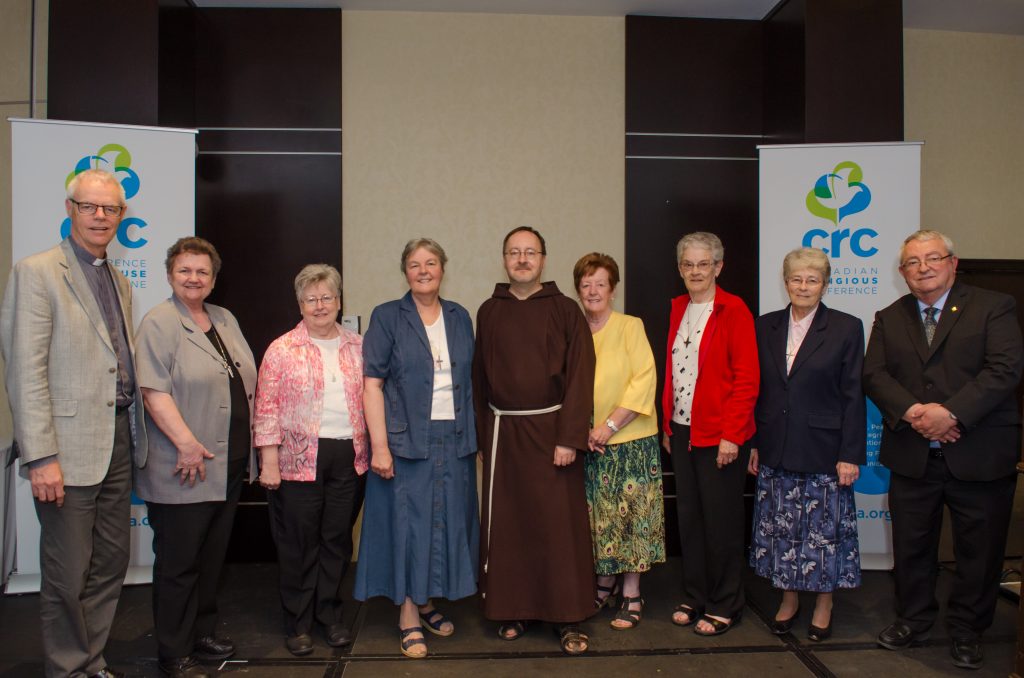 The Promise of a New World

After this interlude full of hope, it was Elena Lasida’s turn to take the stage. She defines herself as a “woman of frontiers:”

According to her, in the middle of the night, there is something germinating, something that we do not yet know. The night is not just a threat, it can become a promise as well.

She quotes the letter of St. Paul the Apostle to the Romans:

“We know that the whole creation has been groaning in travail together until now. . . . For in this hope we were saved. Now hope that is seen is not hope. For who hopes for what he sees?”

She is greatly challenged by this. Our first reaction would be to want to go back to what was before. But that’s not what Saint Paul tells us: to hope is to wait for something new that we do not yet know. It is a new world, carrying more life than the old, which must spring forth.

From Elena Lasida’s point of view, the ecological crisis is not just about the depletion of natural resources, but it also questions the meaning of our lives. It leads us to take a global look at what is happening on Earth. It is in that sense that the encyclical Laudato Si’ harbours inexhaustible wealth and can bring answers “to the nights” of the religious communities.

Her first presentation was structured around three points:

After the break, the members had time to talk with Ms. Lasida. Several questions were then put to her, while others were put in writing and forwarded to her so that she could develop them in her second talk the next day.

After a short break, members began the process of determining CRC’s priorities for the next two years, and voted overwhelmingly for a resolution proposed by CRC’s JPIC Network in Ontario. This resolution was intended to further promote the Calls to Action stemming from the report of the Truth and Reconciliation Commission of Canada (TRC) and involves an action plan being developed for that purpose. 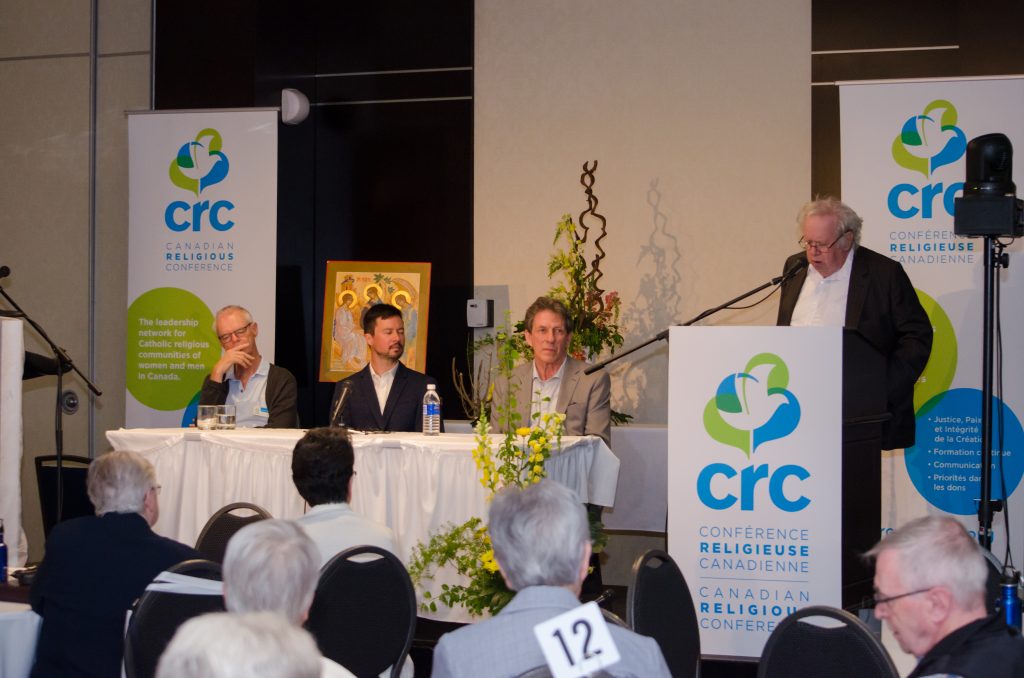 Journeying Together Towards the Unknown With Hope and Creativity

After a relaxing evening, the General Assembly’s programming resumed with the second part of Elena Lasida’s presentation. Starting from the imagined good life with which she had concluded the first part, Elena Lasida tried to answer the members’ questions by grouping them under three key words:

After the lunch break, Gisèle Turcot, SBC, and Gilles Mongeau, SJ, facilitated a period in which participants shared their reactions to Elena Lasida’s presentations. Reflecting on the steps that members, leaders of religious communities, could be called upon to make today, Sister Gisèle saw in the novelty of Laudato Si’ the invitation to go back to the relational aspect and, in particular, to re-found the preferential option for the poorest in that light. It is thus no longer a question of responding through institutions, but rather of seeing opportunities in crises and then creating spaces together to watch over the promise hidden within these crises, either through prayer or speaking networks.

Following this rich session of sharing, the members continued the process of reflecting on the CRC’s 2018–2020 priorities. Towards the end of the day, the statutory meeting was held, during which time reports from the President, the Executive Director and finances were presented to the members of the Assembly. In the early evening, the members were able to attend a heart-warming concert given by the Montreal Children’s Choir conducted by Léa Moisan-Perrier and accompanied on the piano by Jean-François Grondin. 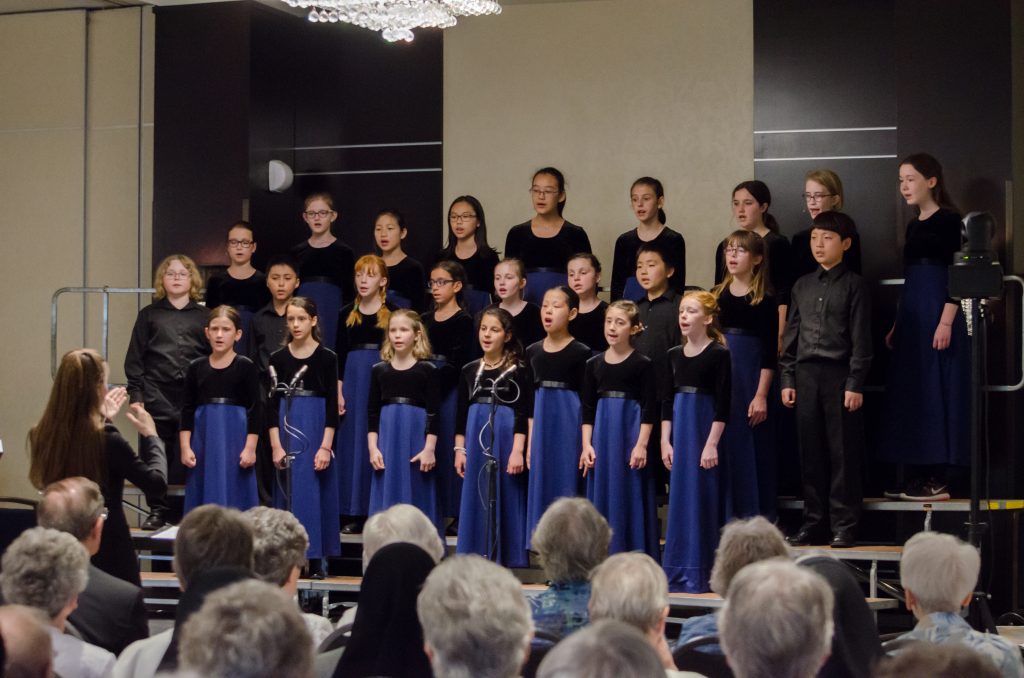 On the last day of the General Assembly, Apostolic Nuncio Monsignor Luigi Bonazzi, representative of the Pope in Canada, addressed the men and women religious present in a traditional speech. The members then finalized the vote on the 2018­–2020 priorities. A Eucharistic celebration co-presided by Bishop Bonazzi and Father Pierre Charland, Provincial Minister of Franciscans in Eastern Canada since 2017, concluded this 32nd General Assembly. This moment of communion was an opportunity to thank the members of the outgoing Administrative Council and to welcome with joy and hope the members of the new CRC Council, for whom the entire assembly prayed.

To see the photo album of the 2018 General Assembly, click on one the two icons below: