The Congregation of the Sisters of St. Joseph in Canada is delighted to announce that it welcomed Sister Mary Anne Larocque as a vowed member on August 11, 2016. 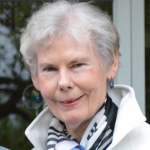 During a joyful Eucharistic celebration in London among family, friends and Sisters from London, Peterborough, Hamilton, Windsor and Leamington, Sister Mary Anne pronounced first vows of poverty, chastity and obedience which were received by Sister Veronica O’Reilly, Congregational Leader. “My overall impression of the day,” said Sister Susan Glaab, Novice Director, “was one of gentleness, joy, companionship and celebration.”

This ceremony was the first celebration of vows since the four independent congregations of St. Joseph of London, Hamilton, Peterborough and Pembroke amalgamated four years ago to become the one Congregation of the Sisters of St. Joseph in Canada.