We were motivated by a sincere desire to further the education, health and Christian formation of the Aboriginal Peoples in such a way that they would be able to achieve their rightful place in an evolving Canadian Society. We wanted them to grow into personal fullness, to be proud of themselves and of their giftedness and to be able to live with a sense of innate dignity. For many students, however, this was far from their experience. How could our good intentions have had such tragic consequences!

We were products of the times in which we lived, with the teaching methods, cultural misunderstandings, social attitudes and theology of those times.

We now know that the residential school system itself, initiated by the Federal Government and in which we participated, was racist and discriminatory. It brought about a form of cultural oppression and personal shame that has had a lasting effect not only on those who attended the schools but also on subsequent generations. We carry immense sorrow for having contributed to this tragedy, a sorrow that stays within our hearts.

We also now know that many children in our care suffered unspeakable abuse and mistreatment. Some Sisters have been accused of actual abuse; many others have been accused of not protecting those in their care.  We are deeply grieved by all these revelations. Good intentions and genuine love on the part of many of our Sisters for the children in our care were not enough and in fact were often not experienced as such.

At the same time, many of our members formed lasting friendships with the children in their care; we have been enriched by these relationships and are grateful for them.

Our priorities in working on the Indian Residential Schools Settlement Agreement were that suffering be acknowledged, justice be done through adequate compensation and that there be a way for us as women religious to both contribute to and enter into a process of healing and reconciliation with you.

Throughout the last more than 150 years, our involvement in the Schools has not been our only ministry with First Nations. We have served as pastoral workers, teachers, nurses, social workers and counselors on reserves, with other First Nations communities and in prisons, supporting those in leadership of various kinds and participating in community events. Although our numbers are small now, to the extent we are able and at your invitation, we commit ourselves to continue to live and serve in your midst.

Institutionally we commit ourselves to use what influence we have to continue to support your efforts to achieve justice within Canada, including adequate housing, education, health care, social programmes and land rights. We also commit ourselves to enhance our efforts to foster awareness and understanding between Aboriginal and non-Aboriginal Canadians and to diminish persistent attitudes of racism and superiority.

Each of our involvements with you has resulted in deep and lasting friendships between our Sisters and many First Nations people. We treasure these friendships and look forward to deepening them in the years to come.

Presented at time of First Nations/Catholic Church Delegation to Rome and the Historic Meeting with His Holiness, Pope Benedict XVI Rome, April 30, 2009 by Marie Zarowny, SSA.

Adapted slightly for Presentation at the “Truth and Reconciliation” National Event in Vancouver on September 21, 2013. 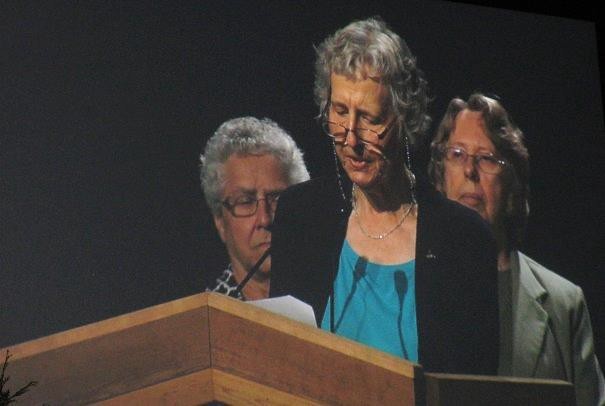