From May 9 to 13, the International Union of Superiors General (UISG) held its biannual Plenary Assembly in Rome. On May 12 at the Paul VI Audience Hall, the attendees had a private meeting with Pope Francis. During the discussion, Pope gave his comments on issues about the place and leadership of Women Religious in the Church.

About the female diaconate, he spoke in favor of creating an official Committee that will study this question. Praising the feminine genius, the Pope insisted on women’s voices to be heard in the Church.

He also agrees with amending the Canon law to support youth engagement in the consecrated life or marriage.

He encouraged the General superior to continue their mission in the Church despite the challenges they may face. 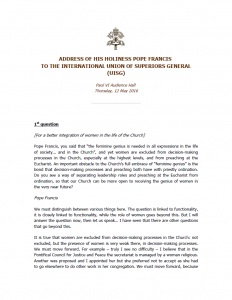