Pax Christi International, with its members and partners, listens to the cry of the communities and calls on the international community to firmly respond to the widespread human rights violations caused by extractive companies in the Americas. We wish to draw particular attention to the violations of communities’ right to water, as extractive industries—including logging, agribusiness, hydroelectric dams, mining, and oil and natural gas extraction—use and contaminate large quantities of their waters. This deprives communities of access to sufficient and safe water, necessary for daily life but also critical to fight both COVID-19 as well as the climate crisis. In most cases, communities have no access to justice.

Worryingly, the violations of the right to water due to extractivism especially affects vulnerable communities from rural areas in the Americas, Afrodescendants, farmers and Indigenous groups. The Indigenous peoples supported by our partners regard water as a sacred gift and an entitity that connects all life and is vital for Mother Earth, which they respect and take care of for future generations. They mobilise against extractive projects in their territories as such projects go against their cosmology.

Extractive activities are detrimental to access to sufficient and safe water across the Americas, which includes some of the most water-rich countries in the world. In the United States access to potable water has been lacking in places like West Virginia and the Navajo Nation due to pollution of water by the extraction of coal, natural gas, and uranium. In Canada, for years, the government has failed to protect water from contamination and to respond to water quality problems in the territories of First Nations. This persistent problem has been exacerbated by contamination of First Nations’ water sources by energy extraction and mining operations.

In Guatemala, the San Miguel Ixtahuacan community is worried about what has happened to their waters since a company running a gold mine was installed and once finished extraction, abandoned their territory: “The Marlin mine company took the gold from our lands. And now our water springs are affected. Our houses are cracked, and we have skin diseases. And now the company has left. They have made good profits from what they took from San Miguel to Canada. And we, we are left with the damage that has been done.” According to research, the Marlin gold mine used 250,000 liters of water per hour, which is equivalent to the amount of water that an Indigenous family in the area uses in a period of 22 years.

In these and similar cases, the impacts of extractive industries on water resources are multiple and often severe. This includes the overexploitation of surface or groundwater sources, pollution, destruction of glaciers, forests, or wetlands. It also extends to issues related to large-scale water transfers, hydroelectric dams to power mining operations and other industries, pollution of land and air, or the effects of extractive activities on local climatic conditions. There is a need for more information and scientific monitoring of the impact of extractive projects on the waters of the communities of the Americas

We support the many protests and other actions taken by diverse communities to call attention to the impacts of extractivism on their waters. It worries us when we hear from members and partners in Latin America that their right to nonviolent protest is being denied and that water defense actions are criminalised. It is also frustrating that water defenders’ ability to exercise their freedom of expression and association is limited because of pandemic measures, while governments in the region continue to promote extractive companies’ activities, putting communities in danger of contracting the COVID-19 virus by entering into contact with extractive industry workers.

Governments of the Americas

▶ To ensure respect for the right to water of communities impacted by extractivism by guaranteeing their access to sufficient, safe, acceptable, and physically accessible and affordable water for personal and domestic uses, including through the rehabilitation of their water sources, in accordance with General Comment 15 of the UN Committee on Economic, Social and Cultural Rights.

▶ To sign or ratify and implement the Regional Agreement on Access to Information, Public Participation and Justice in Environmental Matters in Latin America and the Caribbean (the Escazú Agreement) enabling the access to environmental information, public participation in environmental decision-making and access to justice in environmental matters, including the setting up a pollutant release and transfer register covering waters, in line with Advisory Opinion 23 of the Inter-American Court of Human Rights (2017).

▶ To carry out human rights impact assessments with respect to the use, care and disposal of water and sanitation in the process of granting licenses for extractive projects, and once operations start to monitor whether human rights standards are fulfilled, and if not, to revoke the license. Such assessments should include, from the design stage and before the exploration stage, consultations with affected communities, while the right to free, prior, and informed consent of Indigenous and Afrodescendant peoples must be respected (ILO Convention 169).

▶ To detect and treat the contamination with toxic metals in the human population, livestock, dairy products, fish, farm products caused by extractivism and implement the Minamata Convention, aimed at ensuring the protection of human health and the environment against anthropogenic emissions and releases of mercury and its compounds, including in waters product of mining.

▶ To stop fracking or hydraulic fracturing methods for oil or gas extraction because of its impacts and risks, such as aquifer contamination, exhausted freshwater supplies, poisoned water sources, agriculture, and livestock. Large methane emissions aggravate the climate crisis and cause health dangers such as cancer and birth defects. In this regard, states must promote alternative sources of energy, with full respect for the rights of local communities, in line with the 2030 Agenda for Sustainable Development.

▶ To ensure an inclusive, equitable and gender-based approach in water governance, and to enable affordable access to justice and effective remedies for those affected communities in their right to safe, sufficient water and healthy freshwater eco-systems.

Companies that import raw materials from the nations of America

▶ To comply through its policies and activities with the obligation to respect human rights and remedy the damage caused contained in the United Nations (UN) Guiding Principles on Business and Human Rights as well as in the Organization for Economic Cooperation and Development (OECD) Guidelines for Multinational Enterprises, which includes the respect for the right to water.

▶ To undertake human rights and environmental due diligence to identify actual and potential adverse impacts of company activities compromising community waters; prevent, mitigate, or cease activities causing these adverse impacts; track and monitor the effectiveness of the actions taken; and account for such adverse impacts in their operations, subsidiaries, and business relationships throughout their entire value chains, including compliance with judicial decisions that protect communities.

▶ To carry out meaningful and respectful dialogues with communities, considering their cultures and languages, addressing their concerns, and fully respecting their rights and decisions regarding an extractive project, as the social license is essential. Communities should, if they want to, be involved in remediation efforts, such as by making indepedant diagnoses and monitoring the cleaning of their waters.

▶ To take the issue of the right to water of communities affected by extractivism up in upcoming national and international policy processes, such as the decision-making process on the new European Union legislation on mandatory human rights and environmental due diligence for companies, the negotiations on the UN Treaty on Business and Human Rights and the Glasgow 2021 Climate Conference.

▶ To support civil society organisations that work with communities in the Americas whose waters are affected by extractivism, including those actions that strengthen the capacities of communities regarding their rights and nonviolent activities for their access to justice, provide them with tools to monitor their waters to make contamination visible and for doing advocacy work for national legislatory changes.

▶ To fund serious, objective, and independent research, including by public universities, with truthful information on the human rights and real impacts of the extractive industry on the environmental conditions of communities, including on their right to water.

▶ To address during meetings on the Sustainable Development Goals (SDGs) and the Paris Climate Agreement that it’s not possible to improve the adaptive capacity and resilience of water supply systems as foreseen, if extractive companies continue to take water resources affecting communities’ human rights and environmental sustainability.

▶ To educate and raise awareness about the current extractivist model throughout the Americas, including its roots in excessive patterns of consumption and its impact on local communities, such as their waters, and on the earth wherever extractive projects are located.

▶ To denounce extractive projects that impoverish communities or violate their rights, including the right to water and the right to be consulted, and to engage in dialogue with and divest from multinationals, companies, banks and funds that benefit from destructive extractive projects, and instead to finance nature and our future through sustainable investments.

▶ To learn and share about the Laudato Si’ Encyclical in which access to water for all is mentioned (LS 164), and to participate actively in the Laudato Si’ Action Platform15 as a way of caring for our Common Home.

This advocacy statement is issued as part of a Pax Christi International’s campaign on the right to water of communities resisting extractivism in the Americas. It was launched together with members and partners during the peace movement’s consultation for the Americas on 29 and 30 June 2021. 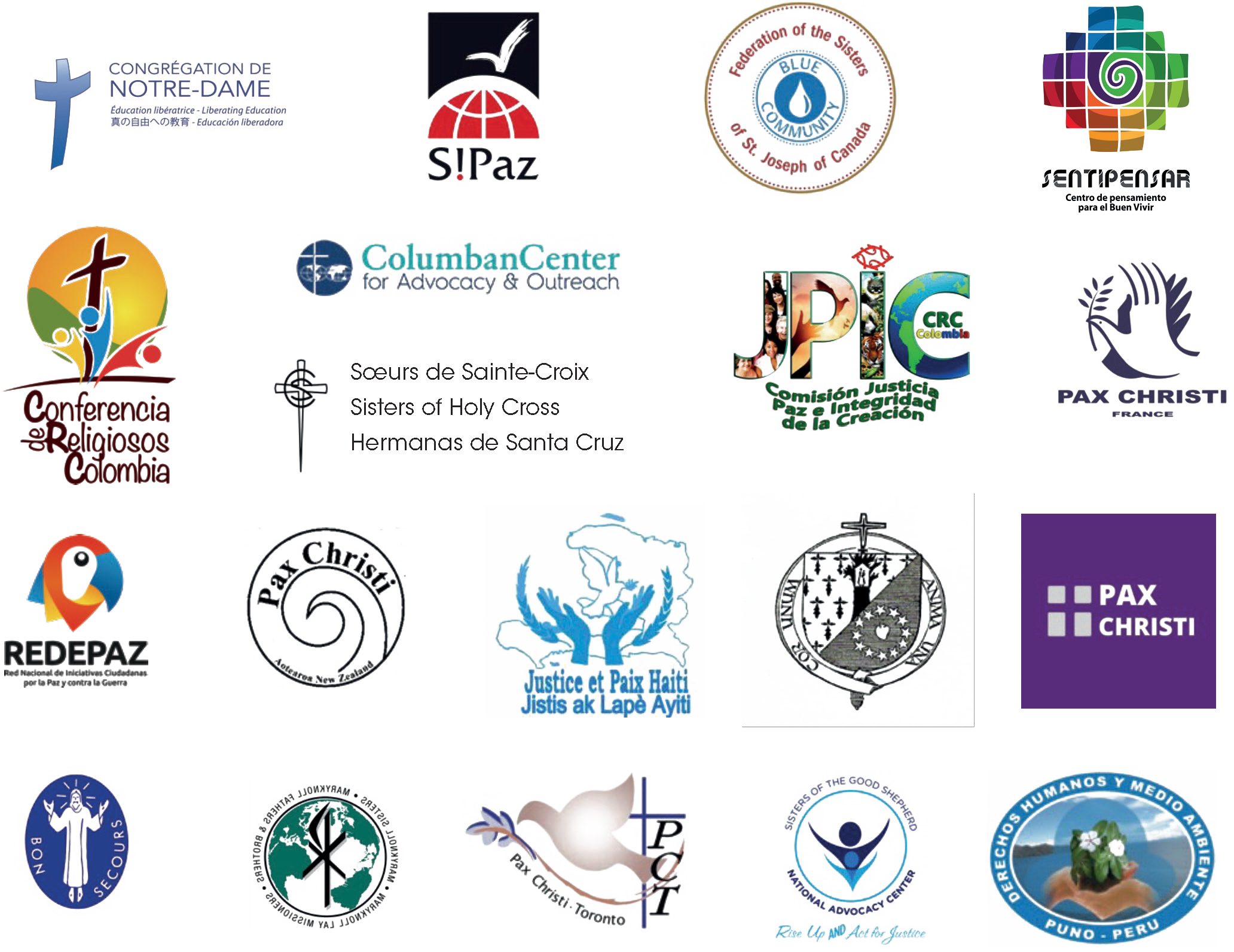