Living in the Gap: Religious Life and the Call to Communion 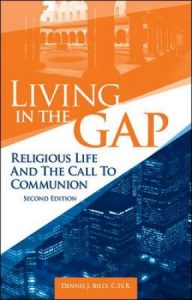 Living in the Gap:
Religious Life and the Call to Communion

“This second edition of Living in the Gap: Religious Life and the Call to Communion written by Fr. Dennis Billy C.Ss.R is prompted by the Church’s celebration throughout 2015 of a Year for Consecrated Life to mark both the 50th anniversary of the Second Vatican Council and the 50th anniversary of Perfectae Caritatis, “The Decree on the Adaptation and Renewal of Religious Life.” The book wishes to raise awareness of the importance of the vocation to the consecrated life in the life of Church and to help religious in their efforts towards the new evangelization.”

“The challenge before religious today and before all those called to evangelical counsels of chastity, poverty, and obedience is to do their best to narrow the gap between vision and reality. The question they should be asking themselves is not whether the gap between vision and reality exists in their lives, but whether it is getting larger or smaller.”

Archbishop Joseph W. Tobin, C.Ss.R., Archbishop of Indianapolis and Former Secretary, Congregation for Institutes of Consecrated Life and Societies of Apostolic Life, comments that Living in the Gap: Religious Life and the Call to Communion “is an excellent tool for the initial and ongoing formation of religious women and men, as well as a reliable voice for all those who want to understand better how this religious life is to be lived today.”

The second edition of Living in the Gap is published by New City Press.

Click on this link to preview the book:
http://www.newcitypress.com/media/LookInside/LivingInTheGap_preview/index.html#/0